Vitamin K is the name given to a group of vitamins of similar composition. The two main groups are K1 (phylloquinone) and K2 (menaquinone). Vitamin K1 is mostly found in vegetables. K2 is produced by bacteria and is the most biologically active form of Vitamin K. The best food sources of Vitamin K2 are grassfed dairy products and natto, a strong tasting fermented soy product eaten mostly in Asia, mostly Japan. Vitamin K2 from animal sources is known as MK-4 while Vitamin K2 produced by bacterial fermentation as found in natto is known as MK-7. 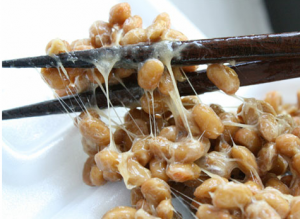 Vitamin K is essential to blood clotting, bone formation, bone repair, reducing inflammation (lowering the release of interleukin-6, a marker of inflammation in the body), brain and nervous system function (essential to myelination process), antioxidant protection (Vitamin K is right up there with Vitamins C and E in terms of protecting our cells from oxidative damage), and protecting us from calcification (the build-up of calcium in tissues).

Due to soil depletion, even those of us eating plenty of vegetables and grassfed dairy, getting enough K2 in the diet is still a challenge. Consider too that Vitamin K2 cannot be recycled by the body like Vitamin K1 and that stores can be depleted  in as little as 7 days. With no obvious deficiency symptoms, most people who have a deficiency would be clueless.

How do you get enough Vitamin K?

We learn more everyday about the complexity of foods and how nature packages our nutrients with other nutrients to aid absorption. I don’t think we’ll ever outsmart Mother Nature–synthetic sources just don’t cut it! It is always best to strive to get your nutrients from food.

Based on population studies and data obtained from Vitamin K2 doses given in clinical trials, it seems that 45 mcg/day would be the minimal dose for therapeutic effect. Several hundred mcg/day is a better target for the amount of Vitamin K frequent natto eaters in Japan would be consuming.

Vitamin K2 has no known toxicity, so adding a daily supplement taken with food to improve absorption doesn’t really have any drawbacks.

MK-4, the animal form of Vitamin K2 is the form of K2 from bacterial fermentation. It is concentrated in food like grassfed butter, high vitamin butter oil, and pastured egg yolks. However, the MK-4 contained in supplements is synthetic and not at all the same MK-4 as found in grassfed butter.  The MK-4 in supplements is made from the extract of the tobacco plant (much less expensive), not derived from grassfed dairy.

Another drawback of MK-4 supplements is that this synthetic form of Vitamin K does not remain in therapeutic levels in the blood for very long – only a few hours.  You’d have to take supplements throughout the day to maintain preferred levels.

So MK-7 is the way to go if you are going to take a Vitamin K supplement. It is in natural, food form and stays in the blood much longer than synthetic MK-4 (only need to take it once/day). Get MK-7 derived from natto (non-GMO soybeans). It’s nutritionally similar to the K2 you would get from eating natto without the taste that most people dislike.