Research confirms that your thoughts can either improve or dampen your immune system.

In Dr. Bryan Walsh’s Fat Is Not Your Fault program, he discusses 2 groups of people whose Secretory Immunoglobulin A levels (SIgA for short) were measured over 6 hours. SIgA is an immune substance produced by gut cells and provides the body’s first line of defense. 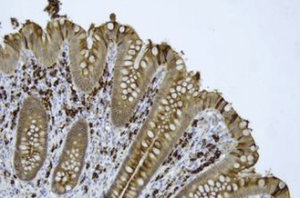 In both groups, baseline SIgA levels were taken and were continually evaluated over the course of 6 hours. In Group 1, subjects thought positive, compassionate, altruistic, loving thoughts for 5 minutes.

Here’s what they found.

Group 1, the “positive Polly/Paul” group, had higher SIgA levels 6 hrs later. They had a slight dip in SIgA initially, it quickly returned to baseline, and then continued to increase throughout the 6 hours above the baseline. 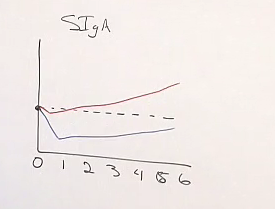 Group 2, the “negative Nancy/Neil” group, had a large initial drop in baseline SIgA that never returned to normal over the course of 6 hours! The initial decrease was much greater than that seen in Group 1. Their levels never recover to baseline. From only 5 minutes of negative thinking, their SIgA levels–their body’s first line of defense–were compromised for 6 hours (evaluation stopped after 6 hours, so we don’t know if/when SIgA levels returned to baseline). Imagine what negative thinking day after day does to your immune system! 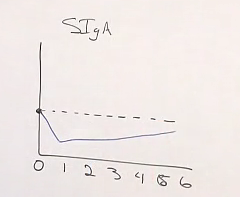 I’d love to see more studies on this topic. Isn’t it astonishing how great an impact our minds have on our bodies? As this study demonstrates, your thoughts can alter your physiology. Your thoughts can make you sick.  Until next time, please think happy thoughts! 🙂